Have you ever needed a simple '%' after a KPI, show 'per hour' instead of 'per second', or remove/add a decimal? Well, then we have some great news!

We're now letting you decide how you want to format your KPIs.

When editing your KPI, you'll see an additional tab called Format at the top. Here, you can choose from several formats, including percentage, decimal, duration and rate over time. When you've locked and loaded the format, you can specify details such as number of decimals, time rate, prefix and suffix.

Hopefully, this will eliminate any "is this KPI showing me seconds, percentage, per hour?"-questions.

Psst… Before you start reading: Many of you have requested to dodge this new feature and keep goin' the OG way to hold on to the 'show last note' possibility, so this feature is not enabled per default. If it's something you'd like to activate, please get in touch with our support team from the in-app chat, by phone or email.

Wouldn't it be nice to be able to take a look at the lead information directly from the callback overview - without having to open the dialer? We think so!

Now, when you go to your callback schedule and click on a lead, the modal you know from Warehouse will pop up, giving you all the juicy details on the lead.

This is quite useful if you'd like to prepare yourself for the callback beforehand, but without opening the dialer and leaving the lead again. If you want to open the dialer, that is still possible by clicking on Go to lead on the right side. 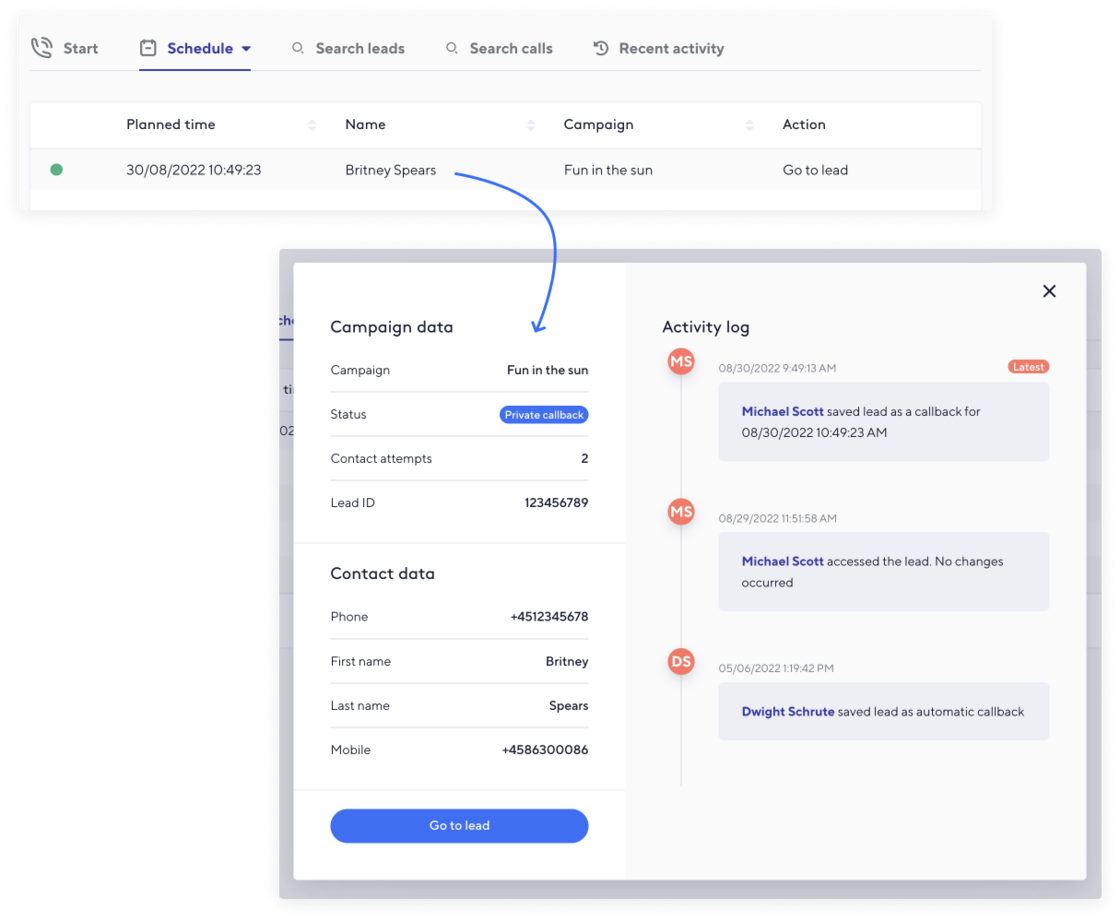 To edit or not to edit leads (permission tweaks)

This week, you may have noticed that some users suddenly were unable to save changes to leads they opened through Warehouse, call search, etc. Here's the explanation, topped off with changes to two permissions.

While we were fixing a small UI bug where the 'last-contacted-by' user often was shown as 'unknown user', we discovered some edge cases not working quite as intended.

So, we've made some tweaks to two permissions; Edit closed leads and Edit last called by. The tweaks should offer more precise control over which situations agents are allowed to change either their own or other users' leads.

These permissions take effect in one of two possible scenarios:

If an outbound lead is offered to an agent, the permissions are not relevant because the agents will only receive such leads if they're allowed to edit them.

This permission allows users to change ownership of leads, i.e., who gets credit for doing awesome work. However, this permission mainly comes into play if the user opens a lead assigned to another user or if the lead has been closed.

Actually, this was the main offender in our previous implementation that made us realize we immediately needed to change this.

This permission is for restricting changes to already closed leads, mainly because sometimes you don't want agents to be able to go back and change a 'not interested lead' to a 'success'.

Previously, the permission would allow an agent to access a success made by another agent, save the lead as a callback - while per default claiming ownership - and then save the lead again as a success. Not a great way to treat your friends, but rarely an issue because it still required that agents were allowed to look up these leads.

Now, users with this permission are only allowed to change the status and last contacted time of the closed leads, but not the owner. And they can only edit the lead if they're the owner - or has access to other agents' leads.

As always, if the lead is unprocessed, a shared callback or a plain automatic redial, everything is still fair game.

So, this was a rather long (and, at times, complicated) explanation, but we're confident that it's actually going to be simpler to understand in the longer run. Toodles!

If you sometimes lose track of your Journey because you branch out more than what's good for the overview of it all, we're here with some great news to simplify your Journeys.

We're introducing a new function that allows you to match several different values in one action, making it much easier to edit, add or delete values when changes occur.

Practically speaking, what happens is that you tell us how you want match to your apples with your oranges, and then give a name to your preferred orange, so you can continue working with it afterwards (here, the orange symbolizes one of your campaigns). Let's grab hold of an example that we, at Adversus, use on our own account:

From time to time, our sales team uploads leads manually using a form that sends the lead directly to Adversus. We then add the lead to the individual campaign of the sales rep who created the lead - so they can contact them themselves.

Previously, we had to create a branch to filter out each specific sales rep and then add it to the correct campaign. This made the Journey quite big, not to mention time-consuming to manage whenever changes occurred. It looked sorta like this:

Now, we're simply using the new match value conditionally action to create the scope for sorting the leads into the correct campaigns based on the lead owner field, hence avoiding branch after branch after branch. It looks like this: 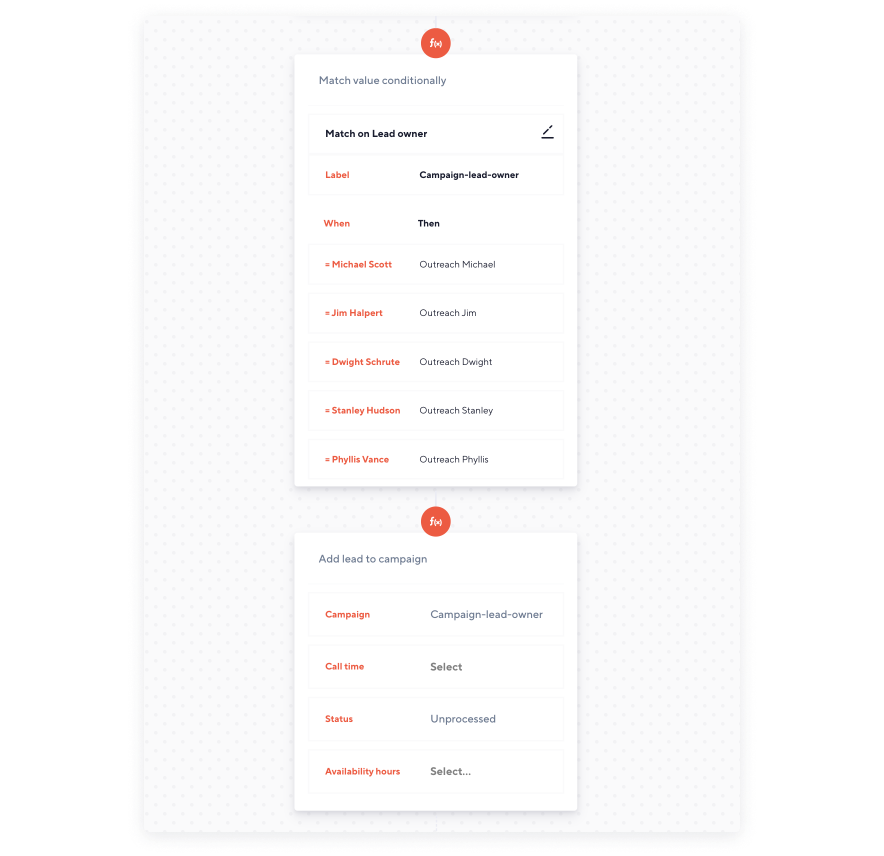 We start by choosing Campaign because our goal is to select which campaign the lead goes into. We're then filtering based on the Lead owner field, 'cause that's how we know who created the lead, e.g., if Dwight Schrute is the owner, then it needs to go to Dwight's campaign.

Under Else, we've chosen the Scranton Leads campaign, meaning that leads that, for some reason, don't match any of the criteria mentioned above are added to this "back-up" campaign.

Lastly, you must create a label for your scope to use afterwards. As you can see in the example, we're then adding the leads to a campaign by using the match value conditionally scope as the value in the campaign field. And now we're done!

If you're in need of some other use cases, here are a few:

Get in touch with our support team if you need help!

Dashboards: Save as private and/or favorite

Have you made a dashboard that's just so darn good that it immediately has become one of your favorites? Or maybe it's for your eyes only?

We didn't want to leave Dashboards out of the cool gang, so as you know from Warehouse and Reports, we've also implemented the possibility to set a Dashboard as private and/or favorite when you save. 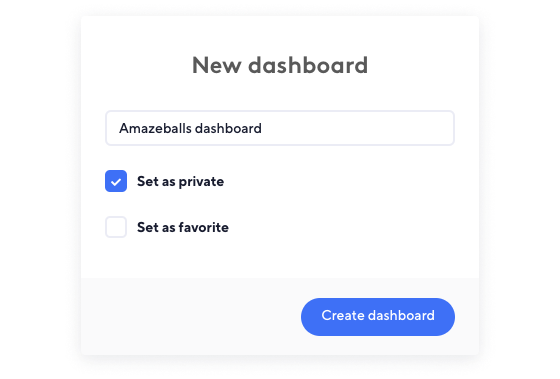 We're gonna admit… This is probably somewhat of a bug fix, but that doesn't mean it's not a nice update.

Previously, when you entered the live overview to listen to agents, you may have noticed that the timestamp on the timeline perhaps didn't quite match the actual timezone you were in.

But no more. Now, we'll first check if there's a timezone selected on your user and set the live timeline accordingly. Though, if there's no timezone set on your user, we'll instead use the timezone your browser is using.

Use dropdown input for numeric fields

Previously, it was only possible to use a dropdown as the input type for text fields, but we know that dropdowns are also useful for numeric fields - especially for API usage.

That's why you now have the possibility to create a numeric result field and use a dropdown as the input type. 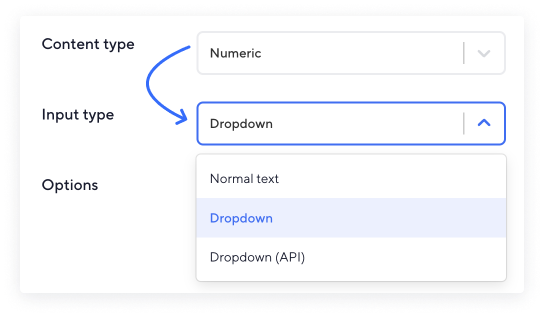 When you’re creating or editing a result field, you can decide when the result field should appear in the dialer to not have an absurd amount of result fields shown at the same time. Maybe you have result fields that are relevant to show when the lead is saved as success, other ones for when it’s not interested, and so on.

We have taken the liberty to add a new option to the Show result field-setting. You can now choose On callbacks. This means that result fields only appear when an agent selects any callback status. 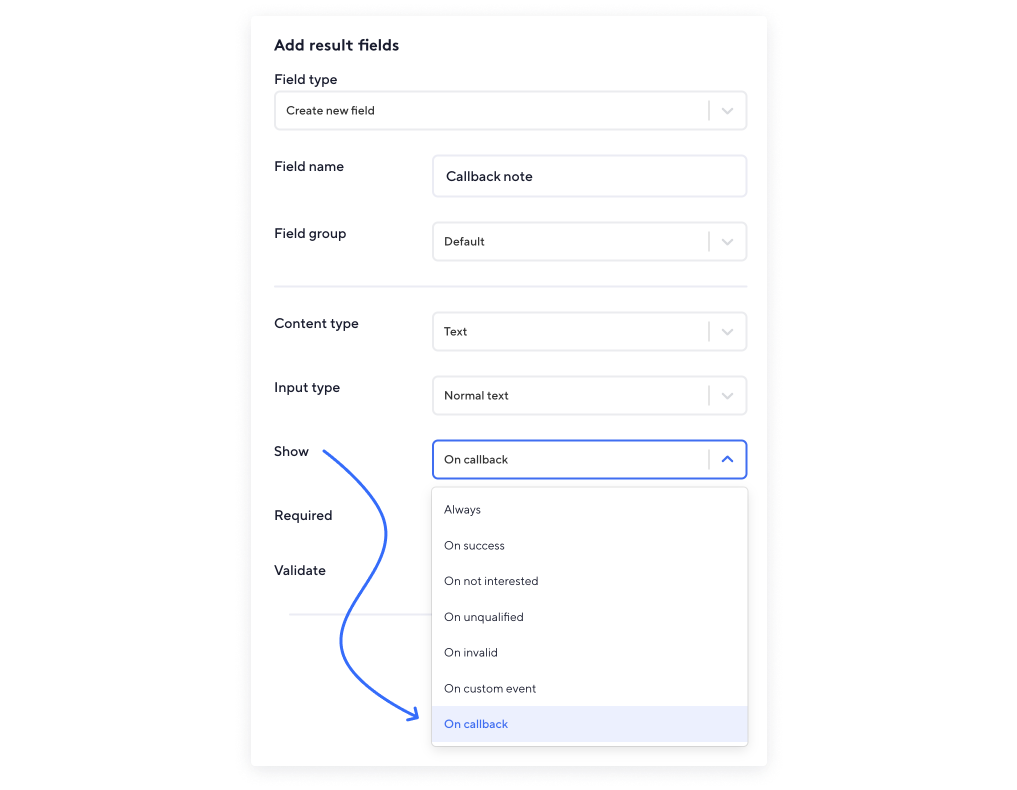 When you create a custom KPI using the source Calls, we've now made it possible to filter based on SIP codes - you know, the Session Initiation Protocol code for all requests/responses we receive, when you place or receive a call in Adversus.

If you want to know more about SIP codes and their definition, we have an overview for you right here.

X left the lead as unsolved

Imagine this: You are active on a campaign and are seconds away from your lunch break. You want to close down the dialer after the lead you're currently handling, but you forget to check Close dialer after this lead before saving, so you receive yet another lead. When this happens, most agents simply close the dialer, leaving the lead they received stuck in the pool of unsolved leads.

We made some improvements to reduce the risk of your leads getting stuck in limbo like this.

If you receive a lead and leave the dialer without changing anything, we're going to return that lead to the call pool and will do so without counting the interaction as a contact attempt. The activity log will still show that the agent accessed the lead, but it will be clear that no changes have been made.

However, if an agent tries to leave the dialer where any changes have been made, the dialer asks if they're sure. Should they ignore this warning, the lead will be left unsolved - as you know from before.